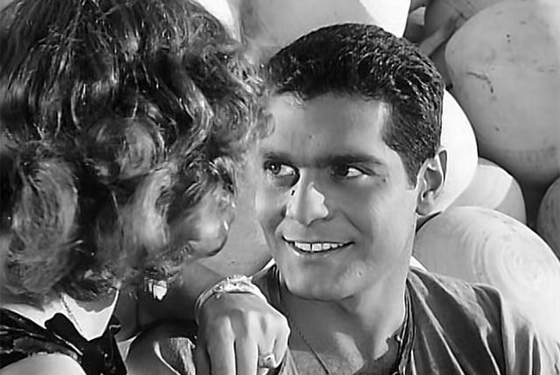 Three years before Lawrence Of Arabia made him an international sensation, dashing Egyptian actor Omar Sharif starred in this wonderful masterpiece of Egyptian cinema that has been virtually unseen in the US since its release in 1959.

Sharif plays naïve young Muhasab, who is asked to accompany his more dependable friend, Mujahed, on a voyage up the Nile to Cairo. Once there, they will sell their boat, the “Bride of the Nile,” in order to buy a barge that will make their village elders more competitive in business and trade. But a ruthless business rival is determined to see that the men never reach Cairo. Matters become even more complicated when Nargis, a scheming carnival dancer (played by the beautiful Hind Rostom), is discovered hiding out in the cargo hold of the “Bride of the Nile.”

Sensual and atmospheric, Struggle On The Nile draws inspiration from the best European cinema of the era, while still remaining true to Egyptian cinematic traditions and locales.